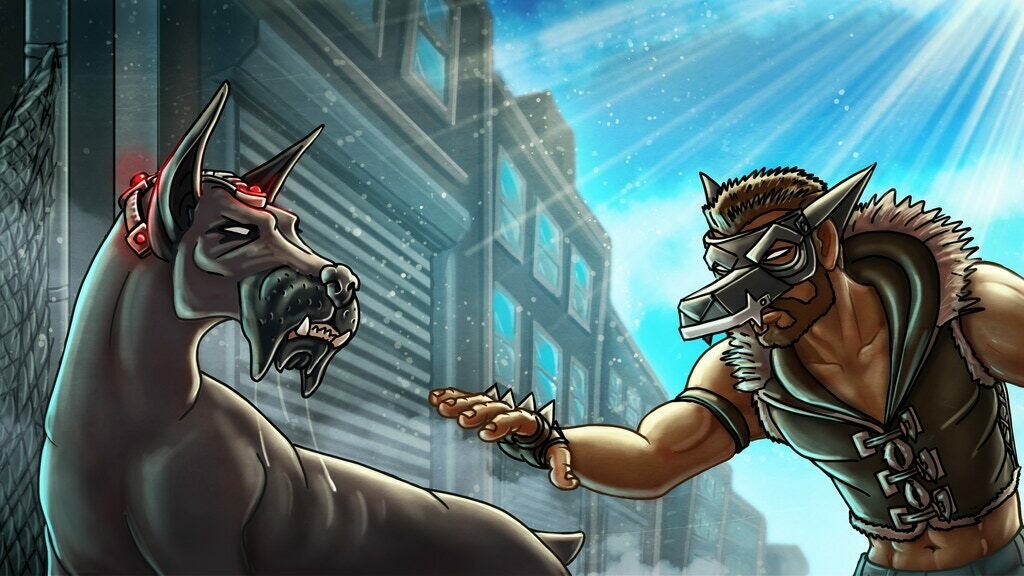 Oneshi Press is run by a writer-and-illustrator team, Lynsey G and Jayel Draco. We publish high-quality comics, graphic novels, and illustrated books that contribute to the collective conversation, helping to unify and transform one another into more nuanced thinkers and compassionate members of the world we share. Our passion is creating stories that explore dark corners, shatter taboos, emphasize progressive ideals, and immerse you in intricate worlds. Learn more at OneshiPress.com.

PACK’s writer: Lynsey G (she/they), multi-award-winning writerly type, is a co-founder of Oneshi Press. She is the writer of Tracy Queen, PACK, Watching P(o)rn, and dozens of articles for outlets like Rolling Stone, Glamour, Playboy, Bitch, and more. She’s also the cohost of the Hourgasm podcast and the creator of the Zombie Adoption Program. Lynsey is an avid fan of all things spooky, a veggiesaurus, and a double Aquarius. Learn more at LynseyG.com.

PACK’s artist: Jayel Draco (he/they) is a multi-disciplinary visual artist and storyteller. Along with Lynsey G, he is the co-founder of Oneshi Press. He is also the co-creator of Children of Gaia (COG), the creator of Mr. Guy: Zombie Hunter, and the illustrator of both Tracy Queen and PACK. After over two decades of professional experience as an art director, illustrator, animator, graphic designer, VFX technician, writer, and web designer, Jayel left a salaried position at Neal Adams Continuity Studios to focus on developing Oneshi Press with Lynsey G. Learn more at JayelDraco.com.

PACK’s inker (Keatus interview pages): Jeff Foulsham (he/him) is the inker for PACK 3: Temperance, the Keatus interview, and PACK 4: Chastity. He graduated from Lock Haven University with a BFA in illustration in December 2018. Since then he has been working as a freelance artist focusing on character design and comic book illustration (he likes inking comics best). He has created his own line of fantasy-genre mash-up comics, and streams their creation along side tabletop games on his Twitch channel. Learn more at foulshamart.com

PACK’s composer: David Gueringer (he/him) is the writer/composer of the PACK theme song. He’s also composed theme songs and audio comics for Oneshi Press projects Mr. Guy and The Zombie Adoption Program. David is a classically and jazz-trained pianist and clarinetist with over 18 years of performing experience who takes a musician’s approach in modern composing. Learn more at https://www.facebook.com/NextArcStudios, https://www.instagram.com/nextarcstudios/, or https://www.youtube.com/channel/UCMqTqRUl07OJ5IOue9gRAyg/featured.

Add-Ons are the coolest thing ever! We know that sometimes you can’t support a Kickstarter campaign at one of the high-level tiers, but you really want one or two of the rewards that come with it. Using BackerKit’s Add-Ons feature, you can order most of our rewards from the Mr. Guy & Origins Anthology campaign—no matter what level you backed at! So if you want Mr. Guy Socks, a copy of “KF Kat Fish’s How to Draw Mr. Guy” zine, or nearly anything else you saw in the Kickstarter campaign, head to our Add-Ons section and grab it there!

What is this campaign funding?

PACK 3: Temperance is a 36-page comics book printed in full color on 70-lb gloss paper. Just like issues 1 and 2 of the PACK series, it brings together the quality and beauty you expect from Oneshi Press comics. The comic will be available in print and digital formats, so every reader who loves dogs, justice, and comics will have access.

Backers at the Kindness ($12) level and above will also receive PACK issues 1 and 2. Backers at the Temperance ($22) level and above will receive the PACK theme song by David Gueringer of Next Arc Studios, a PACK paw print sticker, and a DIY template to make your own Mask of Patience! There are also more high-tier rewards available than you can wag your tail at! Visit the main campaign page to find out what reward level is best for you!

Your Kickstarter survey, along with any digital rewards you may have coming to you, will be sent to the e-mail address you use for your Kickstarter account. And those e-mails will be coming to you from BackerKit. So be sure you keep your eyes on your e-mail inbox! If you still can’t find your e-mails, give Oneshi Press a shout at info@oneshipress.com, or send us a message via Kickstarter. You can also contact BackerKit directly if you have questions for them.

Where will PACK ship to?

Anywhere in the world that receives mail from the US Postal Service! We will ship all rewards and add-ons to anywhere in the world that can receive mail! Shipping within the United States is free for backers (except for add-ons, which require extra shipping). International shipping varies in price, depending on where backers are located. International shipping may take more time than domestic, so if you’re outside the United States, allow a little extra time for your rewards to arrive.

When will I get my rewards?

We are working hard to get your rewards to you as fast as we can! Digital rewards will go out in mid-October, and we hope (fingers crossed) to have printed books and other physical rewards out to you by mid-November. Keep your eyes on our Kickstarter updates and your e-mail inboxes—we’ll be sending updates out to keep you informed.

When will I get my rewards?

Because PACK issues 1-3 are completely finished, we’re only waiting on Kickstarter funding to get them to you! Digital rewards will be out to backers in September 2021. Most physical rewards will be delivered in November 2021. Custom-made art and short stories may take longer to create, but should be delivered to backers by the end of January 2022.

This gritty series asks big questions about justice, gentrification, and policing—important topics that we’re exploring in a comic book format. Kickstarter is helping us reach more readers so that we can give these issues—and the humans and dogs who live them—the spotlight they deserve.

PACK 3: Temperance is already 100% complete, but in order to get it into readers’ hands, we need to raise $5,500 to cover printing, production, and shipping. We’d also like to print more copies of PACK issues 1 & 2 for backers of this campaign—and for conventions and online sales.

That’s why we came back to Kickstarter—a supportive community that helps creators make their ideas into real-world products. Kickstarter allows readers to preorder the book while supporting independent creators like us, and in exchange we send them rewards like comics, art, and more. Win-win!

Backing the campaign now means that you’ll be reserving your limited-edition copy of PACK 3: Temperance. You’ll also have access to oodles of other Kickstarter-exclusive rewards only available from this campaign! Plus, you’ll get our undying gratitude for helping bring this story of crime, justice, and rescue dogs to life!

How does Kickstarter work?

Traditional publishing works by printing a comic, then connecting it with prospective readers and hoping they will buy the finished product. But Kickstarter flips the script by connecting excited readers with their favorite comics before they’re printed. In other words, Kickstarter allows readers to preorder the comic while supporting independent creators. In exchange, we load our readers up with comics and loads of other rewards to say thanks.

Kickstarter is an all-or-nothing crowdfunding platform. That means that, if we haven’t reached our funding goal by the end of the campaign, we won’t receive any of the pledged funds. It also means that, if you pledge to back a campaign, you will not be charged if that campaign doesn’t reach its goal. This all-or-nothing system means that there’s no risk that we won’t be able to fulfill our backers’ orders due to lack of funds. If we succeed, you’ll get what you ordered! If not, we’ll have to try again with a different campaign.

BackerKit is a service that crowdfunded project creators use to keep track of hundreds to tens of thousands of backers—from shipping details, pledge levels, preferences and quantities, whether they have paid or had their card declined, special notes, and everything in between!

The BackerKit software and support team is independent from the campaign’s project team—BackerKit does not handle the actual reward shipping. For more information about the preparation or delivery status of your rewards, please check the project's updates page.

How does BackerKit work?

After the campaign ends, the project creator will send you an email with a unique link to your survey. You can check out a walkthrough of the process here.

I never received my invitation. How do I complete the survey?

The most common reasons for not receiving a survey email is that you may be checking an email inbox different from the email address you used to sign up with Kickstarter, Indiegogo or Tilt Pro account, or it may be caught in your spam filter.

Confirm that the email address you are searching matches the email address tied to your Kickstarter, Indiegogo, or Tilt Pro account. If that doesn’t work, then try checking your spam, junk or promotions folders. You can also search for "backerkit” in your inbox.

To resend the survey to yourself, visit the project page and input the email address associated with your Kickstarter, Indiegogo or Tilt Pro account.

How do I update my shipping address?

When will my order be shipped, charged or locked?

That is handled directly by the project creator. BackerKit functions independently of the project itself, so we do not have control of their physical shipping timeline. If you want to check on the project’s status, we recommend reading over the project's updates page.

I completed the survey, but haven't received my rewards yet. When will they arrive?

As BackerKit does not actually handle any rewards or shipping, the best way to stay updated on the shipping timeline would be to check out the project's updates page.